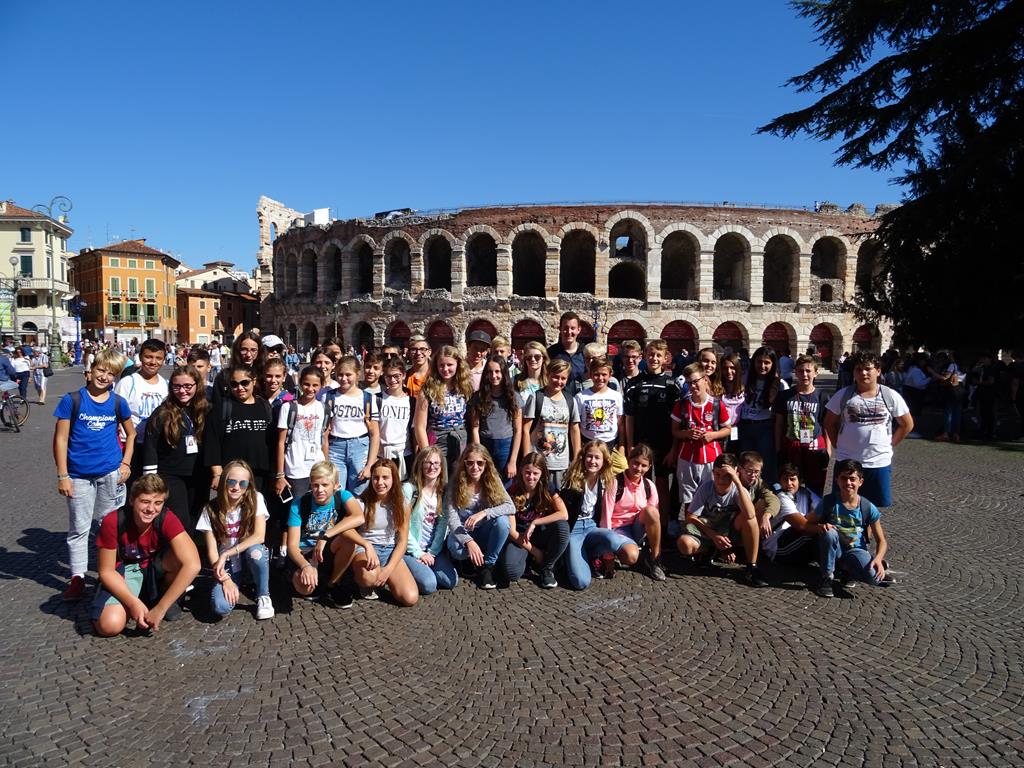 On Monday the 24th of September we went to Rio Saliceto by bus. After seven hours
we did a big break in Peschiera at Lake Garda. Later we went to Rio Saliceto where we
had a snack in the town hall at first. After that we went to see a wine factory, a cheese
factory and a vinegar company. In the evening Asia’s mother picked us up and we went
to Carpi with Alice and her mum. We had Tortellini, tomatoes with mozzarella and
cookies for dinner. They welcomed me in a very friendly way.

On Tuesday we went to Sirmione at Lake Garda. We did a boat trip on the Lake and
had a look at the castle. After our snack we went to Verona. There we had a look at the
arena and the balcony of Romeo and Juliet.
In the evening we went to the farm of Alice’s grandmother. We played with the animals and had dinner there.

On Wednesday we visited their school and they gave us a presentation about Rio Saliceto and Italy. We also played some games and sang songs. Afterwards we went to Maranello to see the Ferrari museum. It was amazing.
Later on we went to Modena where we looked at the Cathedral and went up the clock tower.
In the evening we went to a motocross track where we all together had pizza in a big tent.

On Thursday in the morning it was time to say GOODBYE.
At half past eight we set off to Venice. In Venice we went to the city by train. We did a boat tour by Vaporetto on the Canale Grande. We had a snack at the Piazza San Marco, had a look at the Campagnile di San Marco and at the Doge’s palace. We walked across Venice and went over the Rialto Bridge.
In the evening we went back to Mestre by train. We checked in our hotel rooms and had
a shower. At eight o’clock we went to the yellow seagull (McDonalds).

On Friday we went to Caorle. At the beach we turned Thomas P. into a mermaid. We
also made a Baywatch movie and collected some shells. After the beach-action we ate pizza. At half past three we started our journey back home. We arrived at half past ten.

I liked the sea best because we had a lot of fun and I saw it for the first time in my life.
I am glad that I had the chance to make such a trip and to visit so many beautiful places.

It was a great first time in Italy!